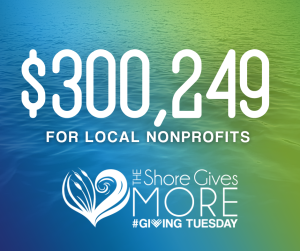 Giving Tuesday, held each year on the Tuesday following Thanksgiving, is an international 24-hour online giving movement. The local campaign, known as The Shore Gives More, is hosted by the Community Foundation of the Eastern Shore and assists local nonprofits with the fundraising effort. By providing an online donation portal, marketing, and technical support, the campaign makes a significant impact through collective philanthropy.

“Nonprofits provide critical services to the local community, and fundraisers like Giving Tuesday help charities connect with donors,” says Erica Joseph, CFES President. “Giving Tuesday has become its own holiday in the nonprofit world, and the local generosity really shines a spotlight on how wonderful our local community is.”

The Shore Gives More was first launched as a Giving Tuesday campaign for the Lower Eastern Shore in 2015 and raised just under $7,500 in its first year.

“As the area’s leading philanthropic resource, the Community Foundation understands the complexities around charitable giving, and we work hard to simplify the giving process for both donors and nonprofits,” says Joseph. “By giving through the Shore Gives More campaign, donors know their gifts will have an impact close to home.”

The campaign received sponsorships from 47 ABC and Shore United Bank which significantly increased the campaign presence.