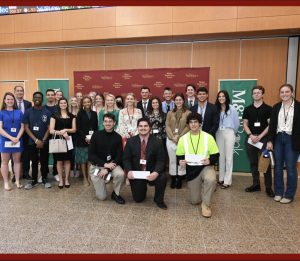 SALISBURY, MD – When junior art major Carleigh Stokes moved from Elkridge, MD, to the Eastern Shore to attend Salisbury University in 2019, she decided to use her proximity to the beach resort of Ocean City, MD, to pursue a new hobby: surfing.

She could not have imagined then that her passion for catching waves would result in her winning more than $19,500 in cash and prizes during Salisbury University’s annual Franklin P. Perdue School of Business Entrepreneurship Competitions for SU students, sponsored by M&T Bank.

Judges applauded Stokes’ business plan for Stoked Surf Wax, a project that stemmed from an assignment she received through a graphic design course taught by Allison Seth in SU’s Charles R. and Martha N. Fulton School of Liberal Arts.

Tasked with using the skills she learned in the class to create packaging for a fictional product, she decided on one that aligned with her hobby: surf wax, an adhesive that helps surfers connect their feet with their boards.

Earlier this year, when she began what she called her “dream internship” with the Atlantic Marine Conservation Society in Hampton Bays, NY, she learned that the paraffin-based surf wax used by many of her contemporaries was potentially harmful to some marine life. With a package design already created, she decided to combat this by making her own blend of scented organic surf wax, created with a less toxic beeswax base.

“It’s all about Mother Nature, and connecting mind, body and soul,” she said.

So far, the product has tested well with her fellow surfers. She hopes to place her organic wax in area surf shops and potentially expand it into a lifestyle brand, such as Billabong, Quicksilver and Roxy.

For now, however, she plans to use her Entrepreneurship Competition winnings to purchase a print-and-cut machine, speeding packaging production and allowing opportunities for more consumer feedback before offering her wax for public sale.

In addition to the $15,000 Bernstein Award, Stokes received $1,000 by advancing in the first round of competitions, the “Invest in My Idea” poster presentation. She also placed first in the second round of the competitions, the “Gull Cage,” a Shark Tank-style elevator pitch to local business leaders, earning an additional $2,500, and was selected as the recipient of this year’s $1,000 SU Diversity Award.

In all, some 23 teams and individuals participated in this year’s competition, with many, like Stokes, representing SU academic schools and colleges beyond the Perdue School.

William Burke, SU executive director of entrepreneurship, attributed the students’ interest in part to a University-wide campaign to inform and encourage those enrolled in all of SU’s schools and colleges to participate in the competitions and use the resources available to them for preparing their entry. These include the Innovation, Entrepreneurship and Economic Development Hub (the Hub), which opened in 2017 and is located on the first floor of Perdue Hall, and the University’s new Dave and Patsy Rommel Center for Entrepreneurship, which opened at SU Downtown in 2021.

Through these resources, members of the University’s Collegiate Entrepreneurs’ Organization (CEO) offer student-to-student business plan and coaching services. Entrants also receive training and support from members of the local entrepreneurship ecosystem, including John Hickman, director of the Perdue School’s Business, Economic and Community Outreach Network (BEACON). He and other SU faculty provided workshops and office hours for the student competitors.

Placing second in the Bernstein round was Bale Out, a construction and warehouse worker safety app proposed by information systems major Chibuzo Opaigbeogu of Upper Marlboro, MD, and accounting major Anthony Calabrese of Annapolis. They earned some $11,000 in cash and prizes, including $5,000 in cash and $5,000 in services from BEACON in the Bernstein round, and $1,000 cash in the “Invest in My Idea” round.

The Extractor, a mechanical device for installing and removing concrete pavers while lessening physical strain on workers, placed third in the Bernstein round. The business plan earned its inventor, Sam Brookbank, an economics major from Mechanicsville, MD, who also placed in last year’s Bernstein round, some $8,500 in cash and prizes, including $5,000 from the Bernstein round, $1,000 from the “Invest in My Idea” round and the James A. List Award ($2,500 in legal services).

Bernstein finalist Steven Tayman, a business administration and management major from Severn, MD, proposed Brigade Battery, a lighter, longer-lasting and more versatile lithium-ion marine battery that could supplant existing lead-acid batteries in recreational watercraft. He earned $1,000 in cash during the “Invest in My Idea” round and the James A. List Award ($2,500 in legal services) for a total prize package of some $3,500.

In addition to the four finalists, 11 other business plans received $1,000 each during the “Invest in My Idea” round. Cash awards for this round were provided by judges and supporters of the competition. They included:

Regardless of whether their proposals were selected for funding, all participants had the opportunity to win raffles with prizes donated by BeachUm, Heather Brooks, Burley Oak Brewing Co., Dogfish Head Brewery, Global Play Network, Plak That, Rommel’s ACE Hardware and The Ugly Pie.